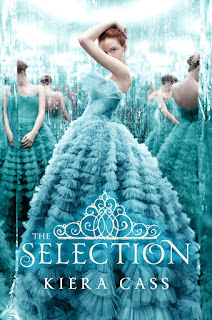 The Selection
By Kiera Cass

America Singer lives in a world of castes: One being the highest and most desirable and Eight being the lowest and poorest. America is a Five which is a caste of the arts and entertainment. When their Crown Prince Maxon comes of age it is time for him to marry. Princes are to hold the Selection, a pool of 35 young ladies chosen from the castes and chose his future wife for this group. To her dismay America is chosen to be one of the 35. Leaving behind her home and the boy she loves, Aspen who is a Six, America travels to the palace to partake in the competition for Maxon's heart and to be the next Queen of Illea.

Through the beginning of the competition America is the only one who doesn't want to be there. She is still in love in Aspen. She soon comes to find she likes Maxon and might see a future with him. So begins the love triangle and the game is on to see who will America chose, who will survive the rebel deadly attacks and who will make the top six, The Elite.

It was so easy to get lost in the story Kiera laid out for us. This is a fast easy read with smooth transitions into the next scene which leaves you desperate for the next book to see what happens. The only problem I had with the story was how much America went back and forth between Aspen and Maxon. But this was a true love triangle except Maxon doesn't know he is in a competition himself for America since having an outside romance is against the rules punishable by death. I was turning pages so fast I couldn't put the book down. I didn't even break before I picked up book two, The Elite.

I gave this 4.5 out of 5 stars. It is Hunger games meets the Bachelor. Personally I hate the Bachelor because I think it is unfair for so many women to be fighting for one guy. I kind of felt the same with this book but it is done so well I easily overlooked this. I recommend this to anyone who loves a good romance and a little suspense.

Posted by Unknown at 6:42 PM No comments:

This is a super easy super quick diy bookmark. I made it in under 3 minutes and used items I had around the house.  All you need... 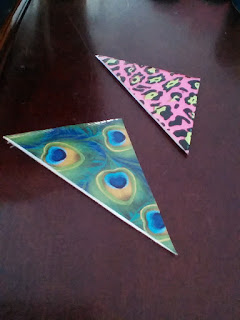